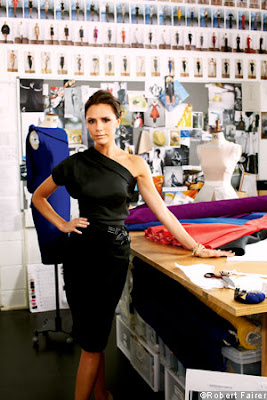 Last September, Victoria Beckham’s critics were fed a fine meal out of their words when she moved from start-up fashion brand to full-fledged contender, eschewing her former small collection presentations for a runway show at the imposing New York Public Library. She also launched a second line, entitled Victoria, as a companion brand to her eponymous ready-to-wear line. In doing so, she proved the celebrity-turned-creative director is not a joke any more – it’s a job description. Thus she paved the way for a new kind of designer to emerge: one without the usual art school background, but with an education of an entirely different kind.

Consider. After shooting to fame via the manufactured bubblegum group that was the Spice Girls and marrying into the pop culture lexicon, Beckham confounded the style set by declaring she wanted to move from iconic wearer of clothes to actual designer of clothes, and launch her own fashion line. “Hubris!” the world responded, citing Jennifer Lopez’s failed Sweetface womenswear collection. “Look what has gone before. A celebrity fashion line will never work.” Especially not a ready-to-wear line with aspirations to compete at the highest levels in New York, London and Paris.

And yet, since its birth at New York fashion week in 2008, just in time for the recession, Victoria Beckham-the-brand has defied all retail trends. Turnover had grown 120 per cent each year for the last three, and the brand is now sold in 107 stores around the world. Last month, she won the Designer Brand Award at the British Fashion Awards. It is because of Beckham that critics and buyers who in the past might have dismissed such brands with a snort and a raised eyebrow, now know to do so could be a very big mistake.

Has your success surprised you?

As much as I believe in what I do – and love it – the assumption has always been that when times are hard people buy luxury brands that they know, that have a history and have proven themselves over time. The fact that people have been willing to invest in me makes me feel quite blown away. I was very aware of all the preconceptions about me and what I was doing when I began. The summer right before we launched I was on holiday with David in Spain, and I remember being on the phone with Simon [Fuller, her backer], and saying, “I’m really nervous,” and he said, “You have nothing to be nervous about. As long as you enjoy what you are doing, and do your best, you have nothing to prove.” And then Marc Jacobs told me, “This is not about being better than anyone else or competing with anyone else; it’s about competing with yourself.” I have always thought that was very powerful advice.

I’ve been told numerous times that I’m a very polarising figure: some people like me and some people really don’t. I also know that when I wear one of my dresses, it helps sales – there’s a quite direct numerical relationship – but I don’t like to rely on that. I am quite happy that now my reviews are really all about the collection, they are not about me. From the beginning I didn’t want people to confuse Victoria Beckham the brand with the surname Beckham. I wasn’t just going to throw money at it. We have always had very strict budgets. One of the steepest learning curves for me has been understanding that every seam or pocket I add has an equivalent effect on the price of a garment.

Last season was your first full-fledged show; previously you held small presentations in which you narrated each collection. Why the change?

We never consciously planned for me to talk through the collections in the beginning; it just happened that way by accident. I think the bottom line is: I talk a lot. I couldn’t help myself. It was very important to me that people really understood what I was doing: the fabrics, the seaming, the corsetry, the cut. I am a big believer in going with my gut. I don’t really do any market research, though I do really enjoy and believe in private in-store events where I meet my customers. I’ve done them in Harrods, Selfridges, Neiman Marcus, Russia – I like to really get into the fitting room with a woman and put her in a dress and see what she says. As someone who has often had to have things tailored in the past, it’s important for me to know where you might need more of a seam allowance, for example. The goal is to make things easier.

Do you feel a responsibility as a female role model?

I very much believe in women and supporting women, and one of the reasons I wanted to get into fashion was to make women feel good about themselves. I’d love to think I made someone’s dream seem possible, but with four children and a husband and a full-time job, I see my value more as being an example of a woman who is facing all the different pressures most women are. The hardest job in the world is being a working parent.

How do you manage the work-life balance?

It’s very difficult. It’s by far the most difficult part of my current situation, and it’s getting more so, as the business grows. I’m very lucky with David, though: he really supports me; he’s never been the kind of man who expects me to be home cooking dinner every night. Everything we do as parents is shared. Every morning, I take one boy to school; David takes the other two. I pick one up in the afternoon, David picks up the other two, or vice versa. In between, I work, but baby Harper goes with me everywhere; if I’m there, she’s there. I’ve been in meetings where I’m changing a nappy.

Are you planning a line of children’s clothes, as rumoured?

No – I am not sure where that story came from. I think it must have been because I had a little dress made up for Harper in one of the prints from the Victoria collection [a cat print]. That’s certainly not on the table at the moment. What we are looking at is doing our own retail, and we are researching different cities at the moment. When you look at our sales geographically, we are spread almost equally throughout markets, so it’s not immediately clear where we should start. We are also planning to launch e-commerce by the middle of next year.

Are you going to stay in LA?

Ooooh, that’s a good question. I love our life here, and even more importantly, my children really love it here: they have great schools, great friends. Having said that, it’s not easy when you live in Los Angeles and your team is in London and New York. I often get up ridiculously early to do video conferences with the UK. Sometimes I start my day at 3am. I think in terms of the business, my aesthetic is more European – I’m a girl from London, after all – but my head is quite American. From the beginning, I wanted to run this as a business. While every season I know I need to push myself creatively, I am also very aware of what my retailers and customers want – which is often one of the signature dresses with internal corsetry. There’s a work-work balance as well.

Do you have any advice for other women?

I am absolutely obsessive about diary-keeping. I can tell you what I’m doing next June. It’s the only way I can make this all possible. The first thing I do in the year is get everyone else’s diary – David’s, the children’s – so I know when all his football games are, where they are, what the kids have to do, when the parent-teacher conferences are, and then I build my work schedule around that. Of course, some things are out of my control: if I have to be in New York for fashion week, I’ll miss something.

For me, it’s important to be respectful of everyone else’s time too. Sometimes you hear a designer say, “Oh, I was up until 5am the morning of the show changing everything around or finishing the clothes,” and I just couldn’t do that. It would make me too anxious, and it’s also not fair to the people around you. From the beginning, I thought I had to do this my way.
ft.com